Getting Down and Derby

While Roller Derby may not fall into the category of mod or modernist, the sport has midcentury roots and is a downright cool thing to do in Vermont, so we thought it deserved a post of its own.

Roller Derby can trace its history back to the 1920s and 30s starting as a traveling exposition, then moving on to be broadcast on radio and television.
We first became Derby fans when we lived in NYC seeing Gotham Girls Roller Derby and rooting for our beloved Queens of Pain. From the very first time we climbed into the bleachers of the packed venue to watch the mayhem unfold we were hooked.  The audience was a mix of misfits, punks, professionals, parents, families, students, and everyone in between.  We were all there to cheer for our home teams as they brutally rounded the track racking up points, bruises, and injuries.
When we moved to Vermont I feared that our Derby cheering days were behind us, but I was happily proven wrong when we discovered the Green Mountain Derby Dames. The crowds were a bit smaller and the games were a bit less brutal, but the Roller Derby fun and spirit was there all the same. 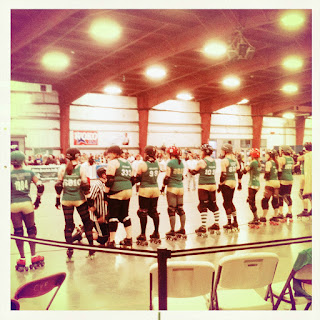 We were able to catch one of the bouts of the double header last night where the Green Mountain Derby Dames took on the Assault City Roller Derby team from Syracuse, New York.  The first of the two bouts (that we unfortunately missed) featured Green Mountain's Black Ice Brawlers where they came out on top 106-101. 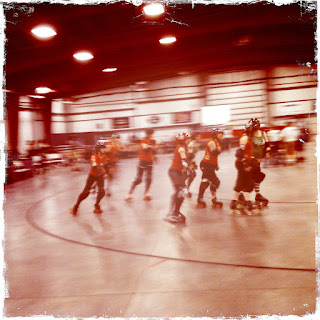 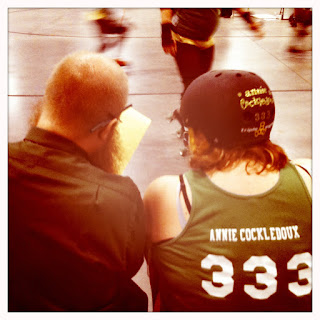 The creativity and strategy on the track is matched in the creation of their names. Some of our favorites  include Blitzkrieg Blondie, Bruise Control, Queen Defeat-ya, Terminateher, Unita Hearse, The Atomic Muffin, The Silencer and Star Slayer to name just a few. 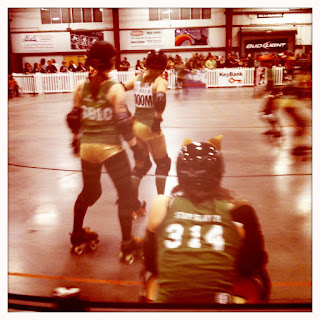 While this was their last home bout before a break, if you haven't checked out The Green Mountain Derby Dames it's definitely an experience endorsed by Vermodernist when looking for something downright cool with a retro edge to do in Vermont.
Posted by Jen LiMarzi at 8:16 PM