Ska In My Backyard

Jen and I were having a couple pints of beer after work on Thursday night at what has become our new "local" - a bar in Winooski called the Monkey House. Since moving to Winooski last August, the Monkey House has filled a void left by our beloved and sorely missed Irish pub in our old neighborhood in Queens, NYC. A good beer selection, and exceedingly friendly bartenders. One of the best "features" of the bar, however, is that it's practically within spitting distance of our apartment (we can see it from our windows). While the younger Burlington-area crowd may consider the Monkey House a staple to see bands, we thirty- somethings tend to leave well before the 10:00pm hour when most of the bands go on.

This trend changed when I overheard the bartender talk about  "Montreal" and "ska band" when speaking to another patron. "Excuse me?" I asked. "Did you say Montreal ska band?" "Yeah, they're playing here tonight. They're called The Beatdown. I'm psyched, they're good." I needed no further convincing.

Despite it being a "school night" I went back to the Monkey House at 10:00 to check them out, and I'm glad I did. The Beatdown describe themselves as "pure and uncompromising reggae and ska, with soul overtones and a punk edge." Spot on. 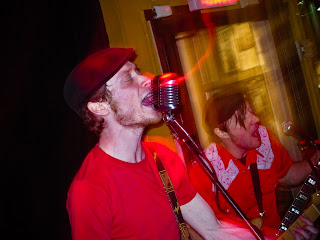 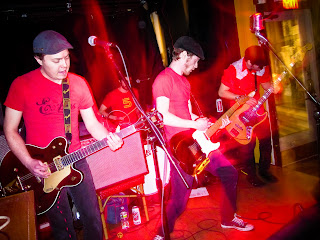 With a firmly third-wave ska sound, their singer's gravelly voice is somewhat reminiscent of the Mighty Mighty Bosstones. And though they have no horn section, the singer made a respectable go at it with a harmonica, and it actually worked quite well. They supplemented their original songs with a great cover of The Temptations "Get Ready." And for their encore, the crowd was treated to their rendition of the Toots and the Maytals ska classic, "Monkey Man."

After moving to Vermont I pretty much stopped paying attention to the live music scene, since there were very few bands I would be interested in touring through our humble city (or so I thought). While The Specials might leave Burlington, Vermont off their next reunion tour list, there are indeed good bands to be seen every now and again - one just has to seek them out.

Over the last few months, I've become more aware of the thriving music scene just a couple hours to the north in Montreal. In addition to The Beatdown, bands like KidSentiment and Le Chelsea Beat are just two garage/power pop/mod revival bands that are gaining momentum, playing shows and putting out records. KidSentiment's latest effort, "Amours De Vacances" can be found on iTunes, and will be released formally this spring - I highly recommend it.

At the risk of sounding somewhat self-indulgent, I'm hoping that the following list of tracks that have been on heavy rotation on my iPod can lead to some recommendations from Vermodernist readers of other current bands from the Vermont area or beyond. Here's what I've been into lately:
The Business - "Out in the Cold" (Official Bootleg 1980-81)
Dice the Boss - "Tea House from Emperor Rosko" (Dancehall '69 comp)
The Kinks - "Do You Remember Walter?" (The Kinks are the Village Green Preservation Society)
The Skatalites - "King Solomon" (Foundation Ska, Vol. 1)
Kid Sentiment - "Nos Insomnies" (Amours De Vacances)
The Specials - "Gangsters" (BBC Sessions)
Laurel Aitkin - "Sahara" (Rudi Got Married)
The Purple Hearts - "Beat That!" (Beat That)
Cock Sparrer - "Watch Your Back" (Shock Troops)
The Ethiopians - "Free Man" (Train to Skaville Anthology 1966 to 1975)
Assuming they would be interested, I'd love it if more Montreal-based and greater New England-based ska/mod/garage bands considered a stop in northern Vermont for their touring schedule. If anyone out there is plugged in and is putting on shows, I'd love to hear from you!

What are you listening to non-stop these days?
Posted by Eric Hauser at 2:51 PM