Let us start off by saying that the Vermodernists are in no way perfect when it comes to fashion. Despite most people's best efforts, there are always going to be certain mornings when it's simply easier to throw on something without much thought - a ratty pair of jeans and t-shirt, for example. Or when it's -10 degrees F outside in the dead of winter and function must come before fashion. But the important thing is, more often than not, we at least try. Do we always succeed? No. But we try. If we're meeting for dinner in "the city" (Burlington, that is) after work on a Friday we each try to step up our outfits a bit. This doesn't mean going to extremes - it means dressing like a grownup. We don't necessarily don suits, ties, or party dresses (usually). To be honest we've found that if you simply leave the house and look presentable for a dining establishment where one does not order at a counter, you're already ahead of the game. Call us old fashioned, but we really don't think it's appropriate for men to wear shorts or for women to wear leggings as pants to a mid- to higher end restaurant for dinner. Plenty of men and women in Vermont do - we see them all the time. But, we digress.

Since most of us (the Vermodernists included) can use a bit of help in the style area, we thought we would just go through some observations and make suggestions as to how a lady or gentleman might have improved her or his look to look more professional, appropriate, interesting, creative, and fun.

#1: Suit Sans Tie - A Missed Opportunity
Eric needs to attend the occasional conference for work. Since he works in the green energy field these conferences are often attended by people who think that dressing up/business casual means breaking out the  black jeans. But there are always a few guys who will wear a proper suit with a pressed dress shirt - and no tie. Most likely they are trying to go for the "dressed down president" look - like when the president gets out there and rolls up his sleeves, sans necktie, and gives a speech to some labor union. But we feel that that look generally backfires. It's a missed opportunity. The guy went to the trouble of putting on a suit and a nice shirt - and then missed an opportunity to make it interesting with a colorful necktie or a pocket square. The necktie and pocket square are often the only ways men have to express their style if they wear a suit every day. Without a tie, a man looks like a grey blob - drab and uninteresting. If you're going to wear fleece and jeans, so be it. But if you go to the effort of wearing a suit, take it one more step and add an interesting tie. It's easy!

#2: Sportswear Daily
Vermont is an absolutely wonderful place to enjoy the great outdoors, no matter the season. Hiking, cycling, skiing, snowboarding, swimming, oh my. And that's great! It's one of the reasons we moved up here from NYC - so we could cruise around on our bikes with slightly less fear of death from traffic. What we've noticed though, is that people tend to wear basically the same performance clothing to work, restaurants, and events as they do whilst cycling or hiking. A walk down Church Street on a busy fall Saturday evening reveals more performance fabric than the Tour de France and Boston Marathon combined. Now, there are definitely some days when due to crazy Vermont weather, you simply need to wear Gore Tex to get around. But those extreme days are fairly few (knock wood). So this winter, instead of throwing on that North Face jacket that you might ski in, guys, try going with a fitted pea coat (about $200, available locally at the Barre Army Navy Store, and made in the USA). And in milder weather instead of just throwing on a hoody, try a shawl cardigan or a Harrington jacket. And ladies, instead of a sleeping bag coat, for those days that are not super cold why not try a fitted pea coat or black trench? Whatever you do, make sure it fits well. All too often people wear gigantic coats two sizes too large, and while this might feel "comfortable" it tends to end up looking sloppy and has the effect of making you look overweight.

#3: It's a Clog Clog Clog Clog World
Clogs are everywhere! Somehow, like a virus that lives deep in the jungle and one day makes the jump from animals to humans, clogs somehow made the jump from kitchen staff and waiters to the general population. We get it - clogs are comfortable and easy to wear. You just slide them on and you're ready to go. But they have become so ubiquitous and cliche, so overdone - it's time to move on, or at least branch out. Not only are they the norm among many women in Vermont, but they have even made the leap to men's footwear - man clogs! With a whole universe of interesting shoes to choose from, try branching out a little bit more and moving away from clogs. They do serve a purpose - to take the dog for a quick walk or to pop out for a quick coffee on a lazy Sunday. But for going out at night, and for going to work - try something new. For men, there are plenty of great choices:

Still a bit rugged, desert boots offer a slightly dressed up look compared to a pair of hiking boots for when it's wet outside. Clark's have been making these for decades, and they are a timeless classic that will never go out of style.

Brogues, or wingtips, can be worn to dress up dark jeans, and still look quite smart with a suit and tie. The detail of the wingtip pattern provides a visual interest which makes your whole outfit look more interesting, and the cordovan/brown shade are slightly dressed down compared to black. Pictured above are a pair by Loake Shoemakers of England and a pair by Alden, which are made in the USA. Granted, they are not cheap. But think about value - the quality of these shoes is on another level compared to most shoes that are bought for under $100 (and tend to last for about 3-5 years before they are discarded). Properly cared for, a pair of Loakes or Aldens will last decades, and can be resoled multiple times. That's not just a good value, that's good for the environment.

Doc Martens
Enough already said here on our love for Docs. Comfortable, versatile, cool. Get some.

For the women, eschew the clogs and invest in something equally as comfortable as a clog, but with a bit of style. Who hasn't lusted over a pricey yet fabulous pair of Fluevogs? 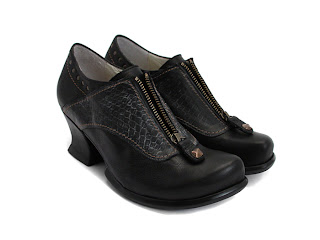 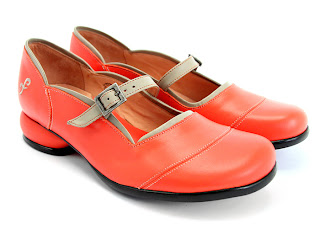 #4: Jeans: Go Dark
We've all seen them - those "moms [or dads] on the go" with a gigantic Starbucks super Grande Venti triple caf in one hand and pushing a double stroller with the other. Sadly, a lot of times the demands of parenthood make it so parents stop paying as much attention to themselves as they used to when they were child-free, and they throw all their energy into their children. And many times, this results in the wearing of the dreaded "mom jean." You know what we're talking about - those shapeless, light-colored high-waisted blue jeans that should be relegated to the dustbin of bad fashion history along with 8 Ball jackets and acid wash denim. And despite the jeans' moniker, men are just as guilty. Please - eschew those light, shapeless blob jeans and opt for a darker jean - a darker wash is more slimming, modern (yet classic), and offers a more versatile, neat look.

#5: "If you don't have fit, you don't have style" - Clinton Kelly
Vermont is repeatedly rated one of the most fit/most healthy places in the country, but you wouldn't know it by looking at its inhabitants. That's because many people often wear clothes that are too big. If you've just run that marathon or spent your day snowboarding, show off the fact that you don't look like you topped your day off with a supersized Whopper!  Even if you aren't the next Olympic athlete and prefer to spend your afternoon with a pint of porter and a pretzel, wearing clothes that fit (not to be confused with clothes that are too tight) makes you look much better than wearing something Mrs. Roper would wear.

The original mods of the 1960s were known for being obsessed with fashion down to the smallest, most minute detail. They would spend unspeakable sums of money on clothes only to move on to the next fad or trend the next week or month. Despite our love of many of the original mod stylings, following in their footsteps in that manner is not what we're advocating here. It's more about slowly building a wardrobe built on some classics that will allow you to not only look like a grownup, but will communicate your personality and character to those around you.

Again, we are far from perfect, and we're not trying to judge. We just think that the world would be a more interesting place if more people took more care with the way they presented themselves. It's fun! And it doesn't have to cost a lot of money - just ask Giuseppe over at An Affordable Wardrobe. He recently posted this:


Art Blakey playing some amazing drums in a nice suit and tie in 1965. Look how cool he looks! If he can play drums wearing that, surely you can manage a tie once in a while! So throw caution to the wind - put on that bow tie that's been sitting in your drawer for years. Wear that really cool but slightly offbeat vintage dress you snapped up for $25. Leave the clogs, fleece, and sweatpants at home, and wear something that makes you look like a grownup - not a 40 year old man-child!

We'll leave you with a couple of quotes:

"Create your own visual style ... let it be unique for yourself and yet identifiable for others."
-- Orson Welles

A couple local resources (echoed from an earlier post) for some classics:

Banana Republic - I know, they are a chain, and most of their stuff is made in Asia. That being said, the quality of their stuff is generally very good, and they do offer some nice, classic, versatile items that you can use in your wardrobe. Get on their email list and you'll never have to pay full price - we get 20-40% off coupons almost weekly.

Urban Outfitters - Again, another chain, but they too have some interesting stuff every now and again. Guys can find some really interesting trousers and ladies can pick up some great basics and accessories.