Day Trippin' via Amtrak in Vermont

Today is our 5th wedding anniversary. We were looking for something fun, different, and Vermont-centric to do this weekend to celebrate. Ever the fan of nostalgia, Eric suggested that we hop on Amtrak for a day trip somewhere in southern Vermont or Massachusetts. He had admittedly unrealistic romantic notions of dining and enjoying a cocktail in a lovely dining car while the scenery whizzed by. Jen, a long time Amtrak veteran from her college days (where she endured 10+ hour trips back and forth between New York City and Rochester, NY) was quick to disabuse Eric of any such notions. "It'll be late, crowded, and probably will break down along the way, " she told Eric. Thankfully she was wrong.

But where to go?

A quick search of the Amtrak web site revealed that The Vermonter traveled daily between St. Albans, VT (one stop north of us) and New York City (and in fact continued on all the way to Washington, DC for any especially brave souls). There are several stops in Vermont, including Waterbury, Montpelier, Randolph, White River Junction (WRJ), and Brattleboro. We'd been to nearby Hanover, NH (where Dartmouth College is) before, but we'd never stopped in neighboring WRJ. After some quick research, we decided that it looked like a cool little New England town that could be a lovely place to spend a day in October. WRJ it was! A note for those interested - for a limited time Amtrak is running a special where tickets between any 2 stops in Vermont are only $12!

Unfortunately, there is only one Vermonter train each way per day. Meaning on Saturday we'd catch the 9am train from Essex Junction, VT southbound arriving in WRJ at 11am and we'd board the return train from WRJ at 6:45pm. We hoped there would be enough to keep us busy.


A Step Back in Time

When we stepped off the train in WRJ it did have a certain feeling of stepping back in time about 50 or 60 years. The downtown is a relatively compact old school New England sort of town. There are a lot of old buildings with signage from the 50s or earlier. Very few cars (or, in fact, people) were downtown so I would not describe it as bustling by any means. But it was lovely. When an 80 year old driving a 1950s vintage two tone Chevy drove by, we looked at each other and said, "that seems about right." 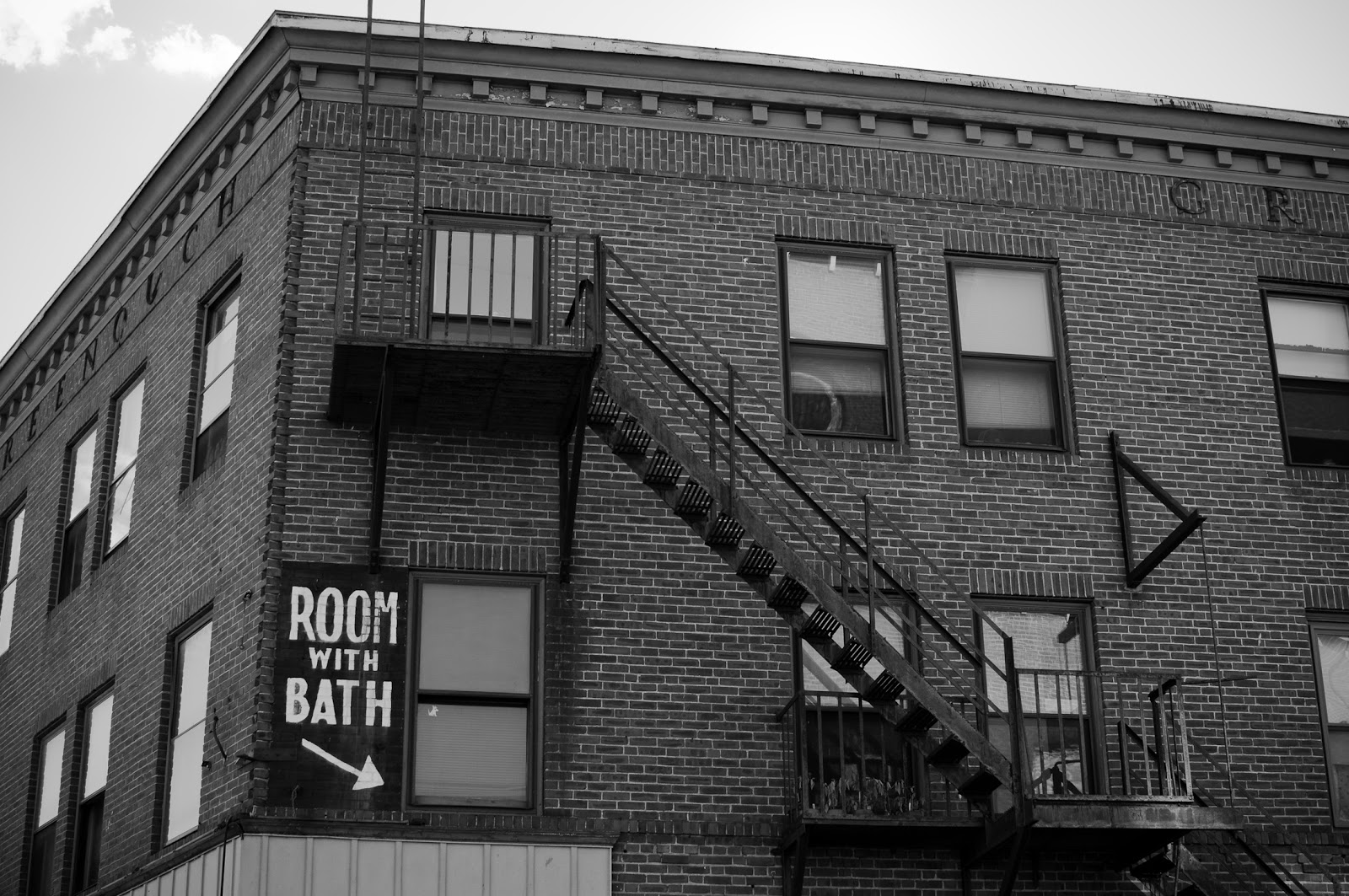 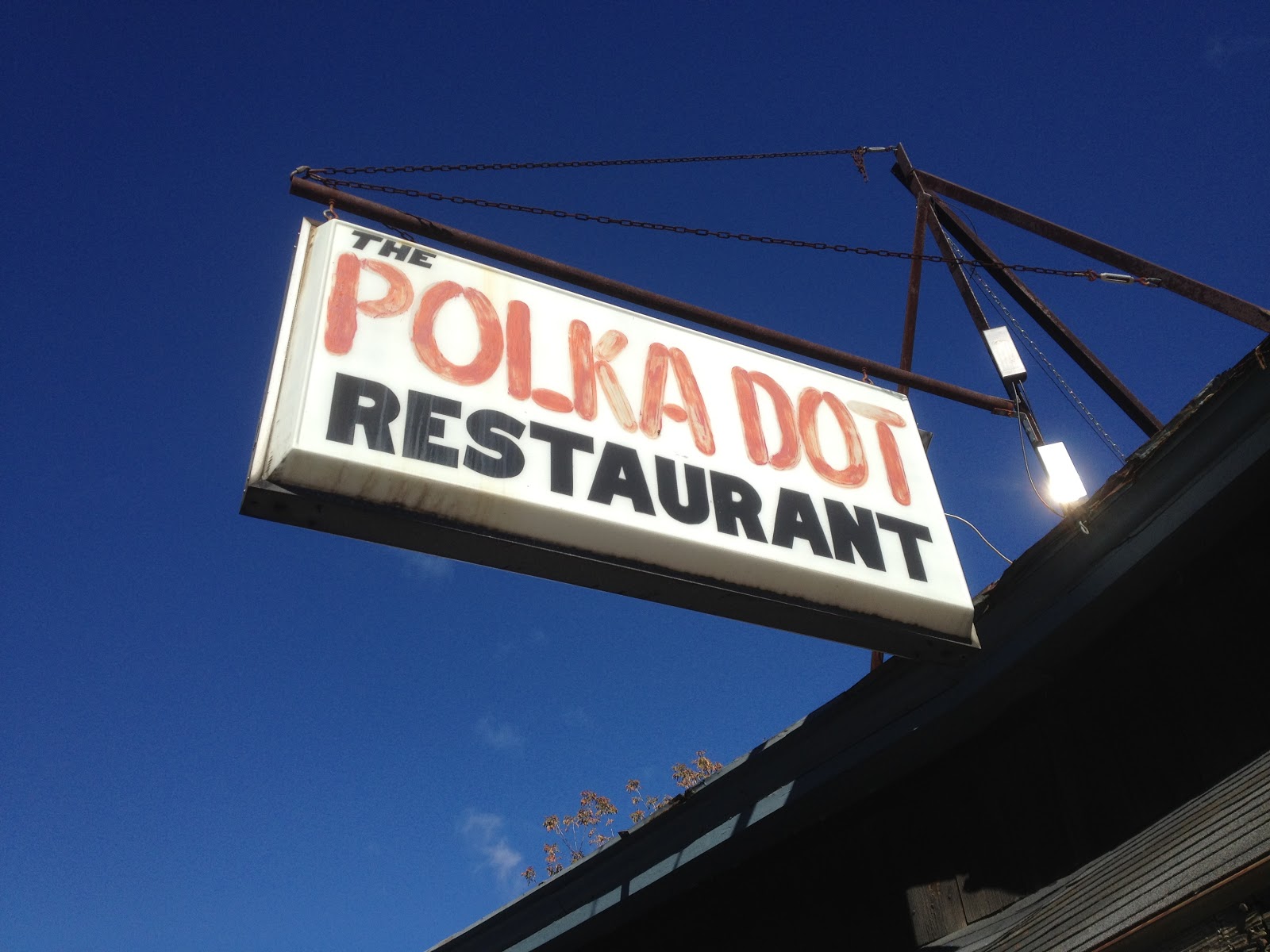 Jen did a bunch of research before our trip and the destination we were mainly looking forward to was a shop called Revolution, a clothing store that specializes in clothes from independent designers from the region as well as a lot of great vintage stuff. It did not disappoint. Jen picked up a cute colorful wrap skirt by Mountain Ash Design, and Eric found a fantastic vintage, Made in USA dark green tweed blazer, probably from the 1960s. One of the shop  owners, Kim, was extremely helpful and friendly and gave us tips of what else to check out in town. We highly recommend checking out Revolution if you're in the area. 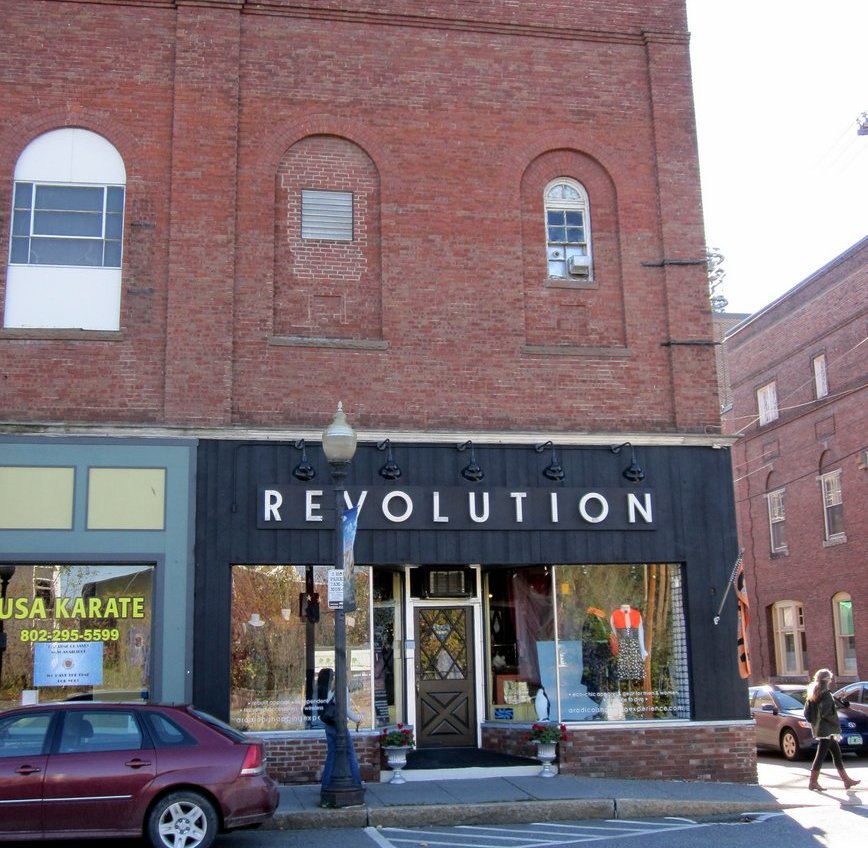 After Revolution, we wandered over to a couple of architectural salvage shops. The first was the non-profit ReCOVER Store whose proceeds help fund the COVER organization. Their mission is to "build community and foster hope through cooperation and fellowship among all home repair and reuse participants."  The shop was filled with reclaimed material - everything from lovely vintage glass light fixture shades, to tile, to flooring, to bed frames, and even kitchen utensil and tools. The second shop we visited was Vermont Salvage which was bigger and sold only architectural/larger salvaged items. 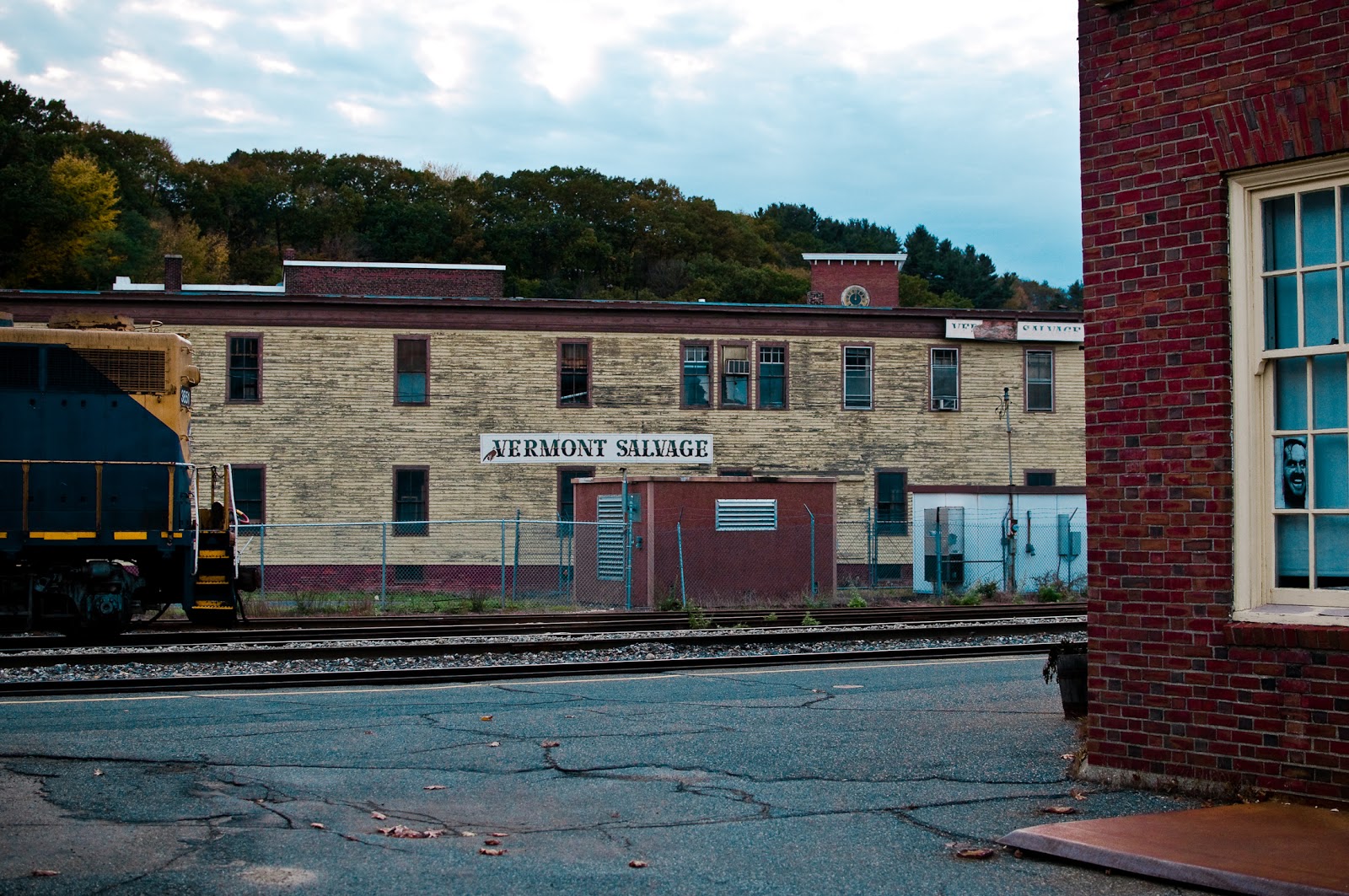 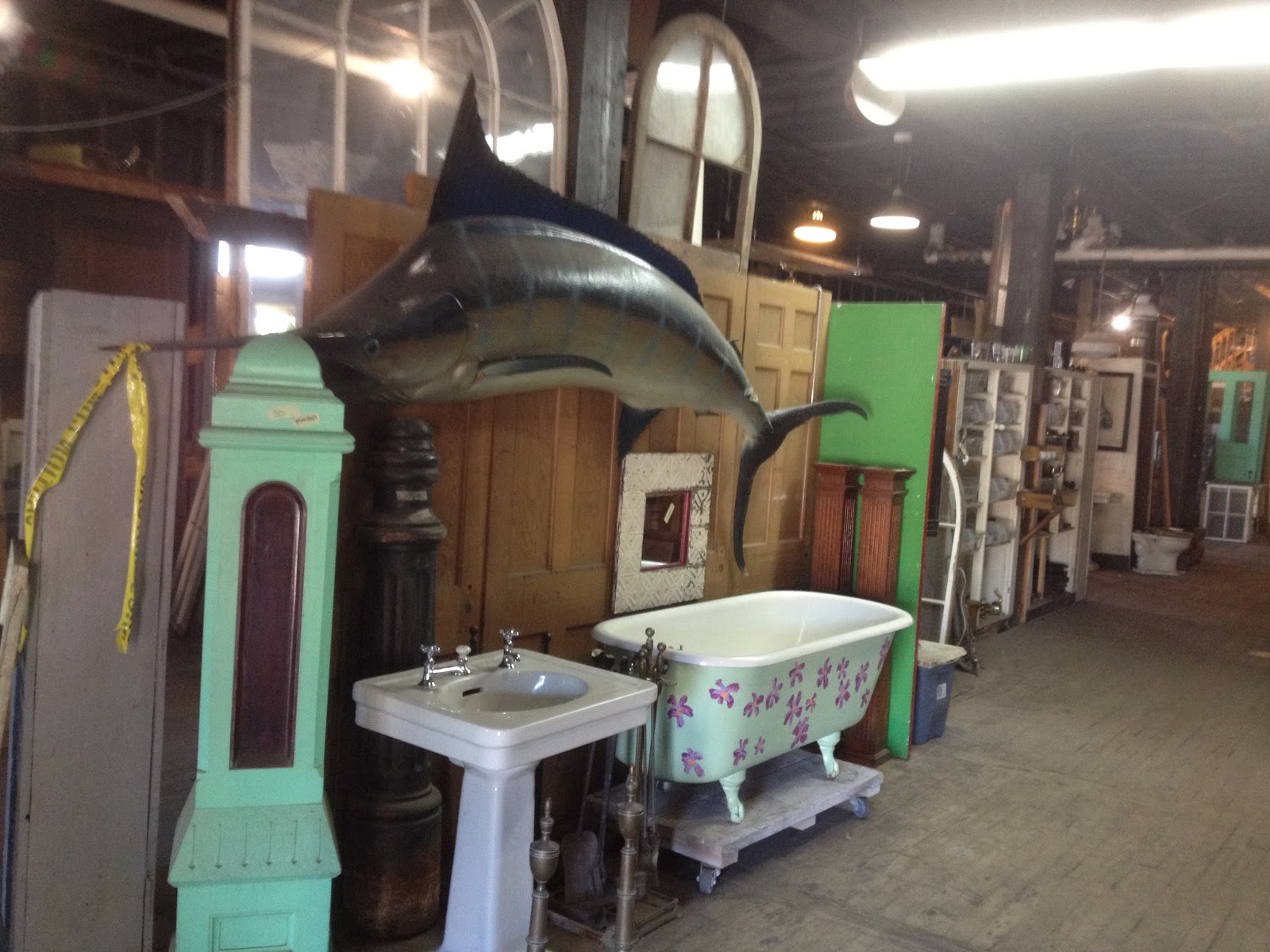 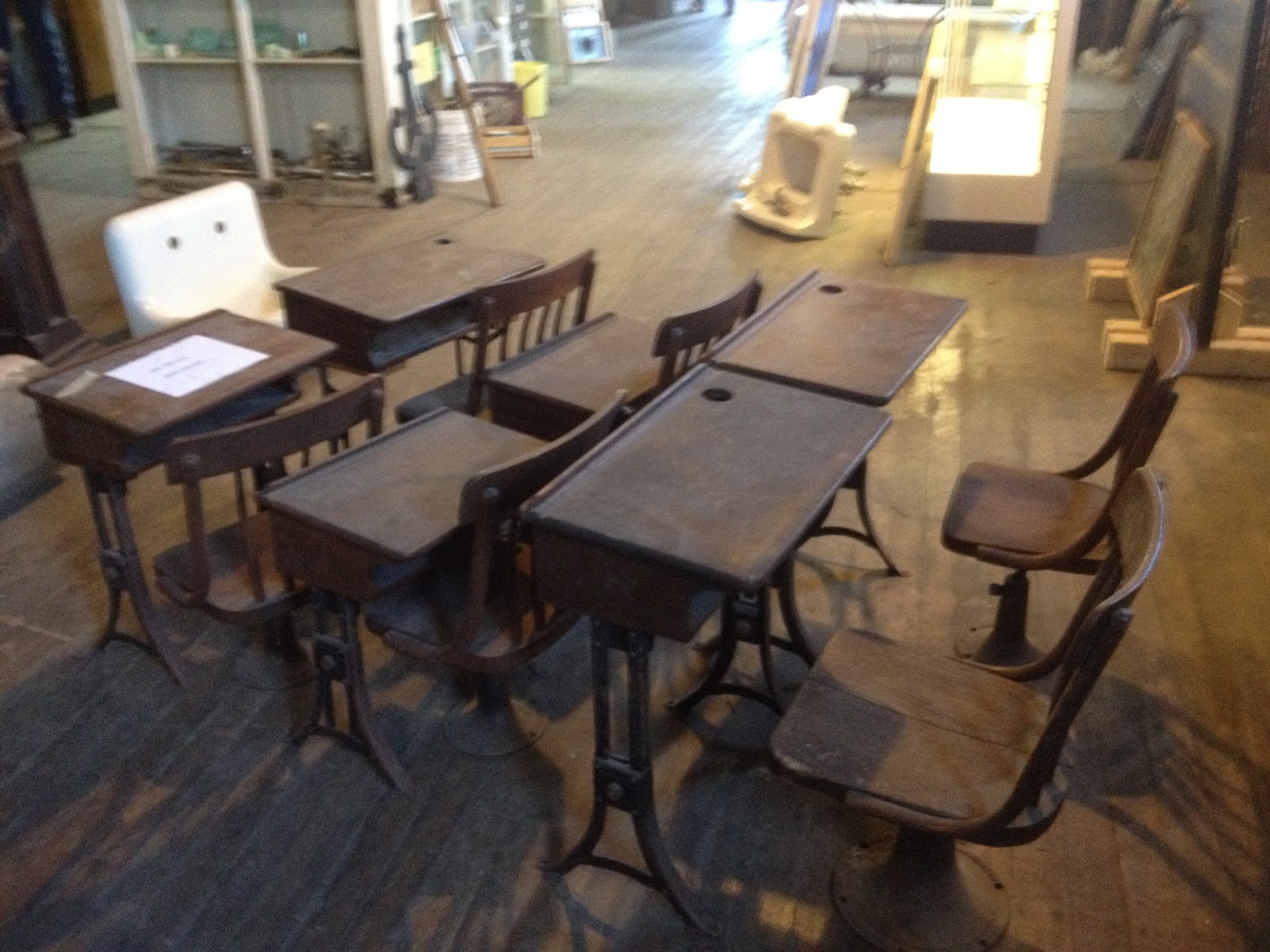 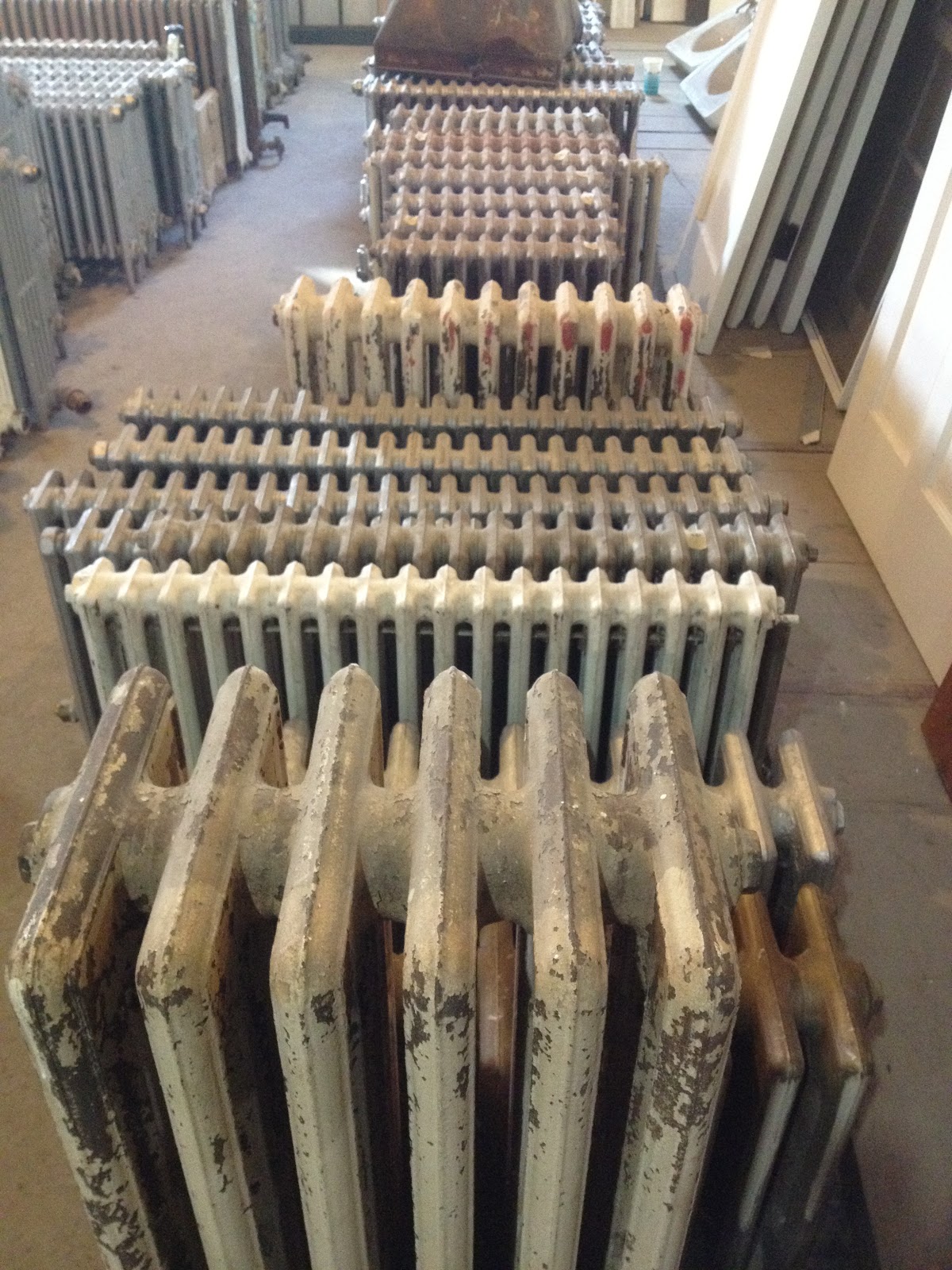 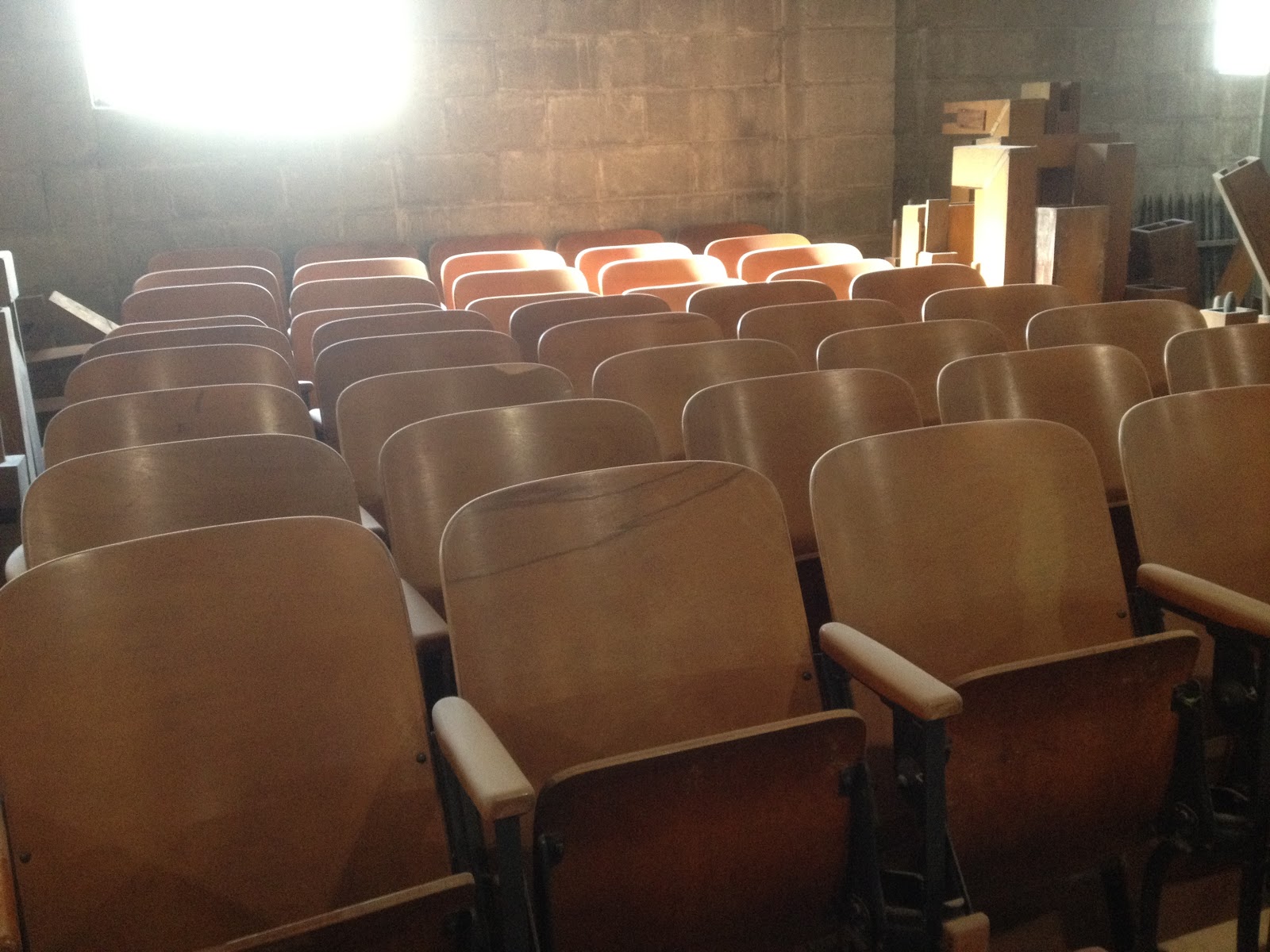 Need a claw foot tub to complete you vintage bathroom? Plenty (as well as just the claw feet). Or how about a gigantic wooden mantle, or even a set of pews from a church? Check. Many to choose from. There was a set of cubbies from an elementary school with the children's names written on masking tape still stuck to the wood. There was a huge half-circle window that was probably 100 years old. Doors, desks, lockers, file cabinets, toilets, sinks of all sizes, benches, windows, even old school tall men's room urinals - they had it all. If we lived in a Vermont farm house instead of a 1,065 square foot condo, I could easily see myself going absolutely crazy in a place like that. There was an old EXIT sign that lit up that was only $20 which tempted me and would fit in our condo, but we didn't purchase it. They also have a fair amount of smaller stuff - hinges, switch plates, some pulls, knobs, faucets, etc. - and no other knick-knacks. Everything is strictly architectural/building salvage stuff. If you are in WRJ and enjoy this kind of thing, don't miss this store.

Next stop was a visit to the Center for Cartoon Studies, a school that "offers a two-year course of study that centers on the creation and dissemination of comics, graphic novels and other manifestations of the visual narrative." They have a small gallery/visitor center that was open when we were there. We stopped in and admired some original comic strips they had on display from the 1950s including a few vintage Nancy strips. 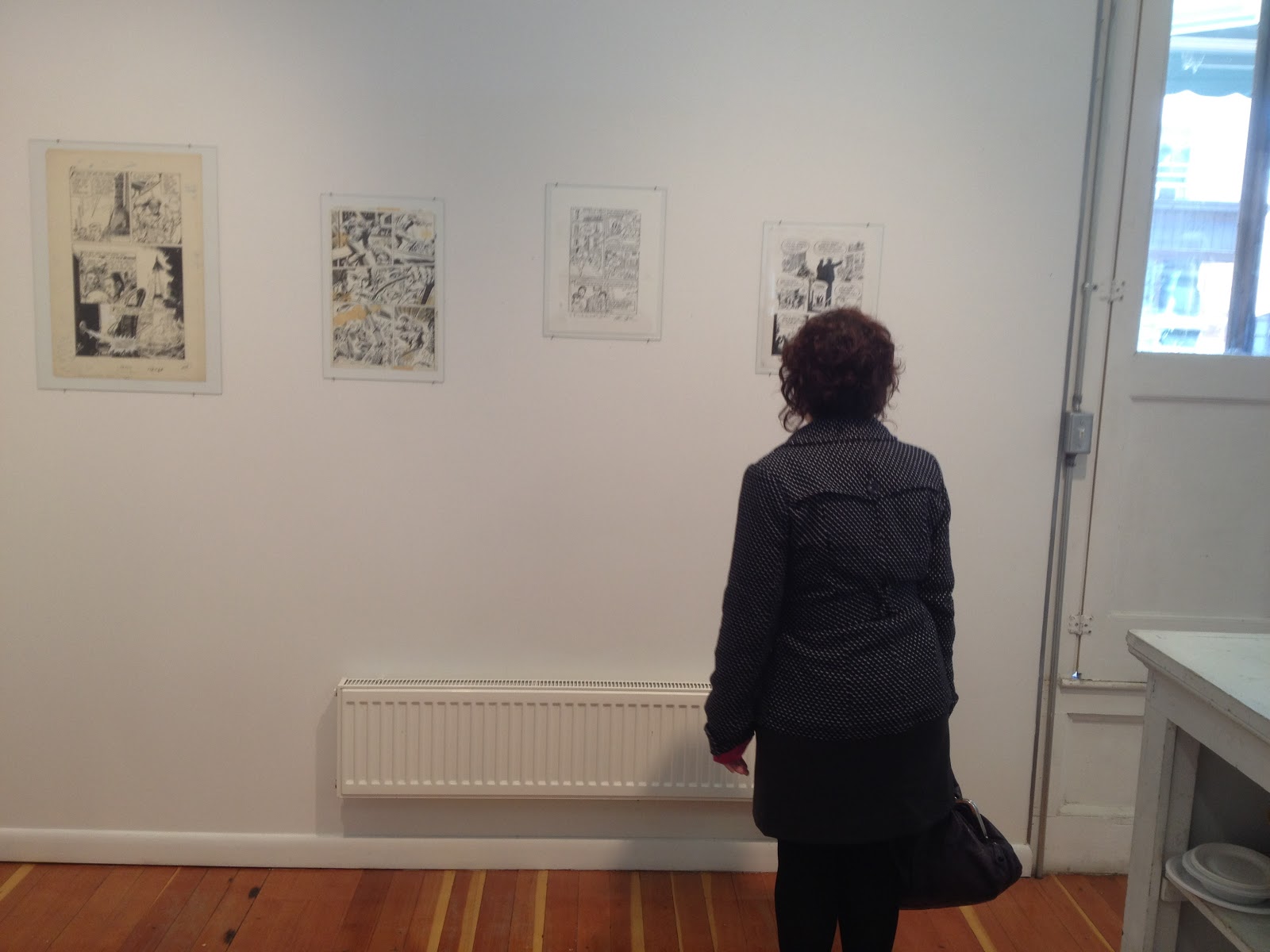 It's in a really cool old building with a few really nice vintage signs, including this one from the old Colodny's Surprise Department Store. 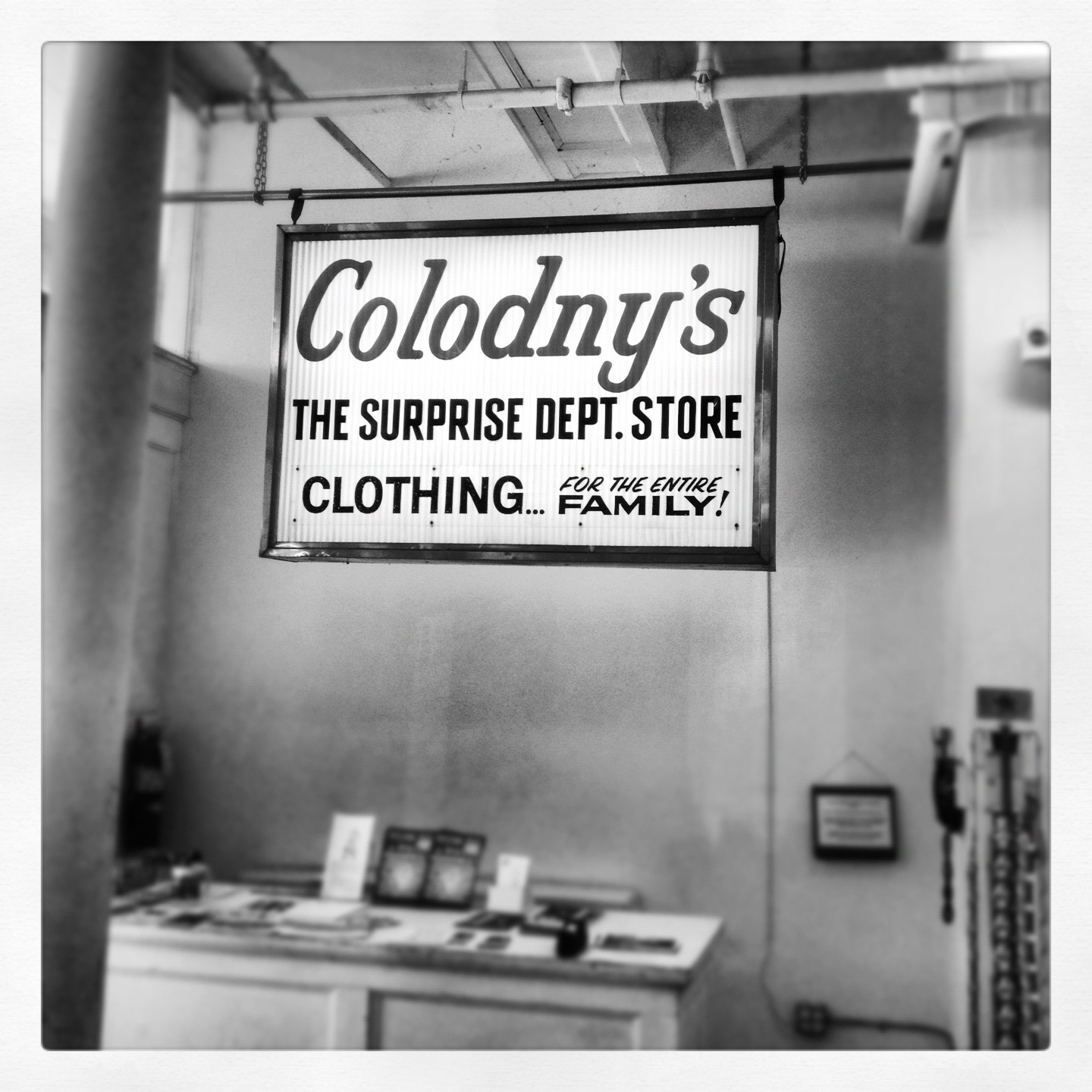 One of the more eclectic stops in WRJ was the Main Street Museum. 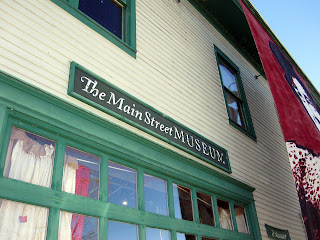 The museum's Web site describes it as "An eclectic display space for material culture and an experiment in a new taxonomy. Originally thought of as an "alternative" museum, the museum's present form and activities resemble the 18th and 19th century "cabinet of curiosities" and point to an interest in the historic roots of museums and museology." 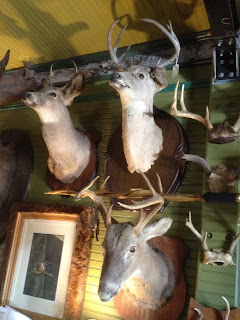 Personally, we thought the museum was akin to taking a brief peek into the mind of someone like John Waters.  The museum contained everything from taxidermied animals to a rubber doll leg and a large image of a salad all with intriguing descriptions. 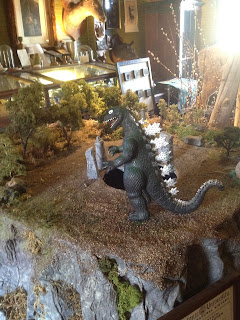 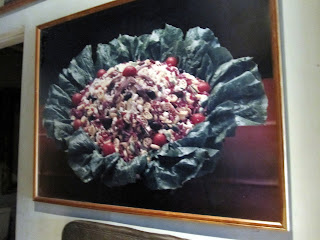 Part freakshow, part get your freak on, this was definitely a great stop on our trip!

With some time to kill prior to our train we grabbed a cup of coffee at the Tuckerbox Cafe, which provided a nice end of the day shot of caffeine and place to rest our feet.

The bulk of the shops in town closed at 5pm on Saturday, which left us with an awkward hour and a half to kill prior to hopping the train back north.  We headed to the Food Co-Op to purchase some provisions for our train ride to avoid dining on a dinner of Amtrak snacks.

All-in-all a lovely retro-fabulous day in Vermont, and proof that there is always something to explore in the Green Mountain State!